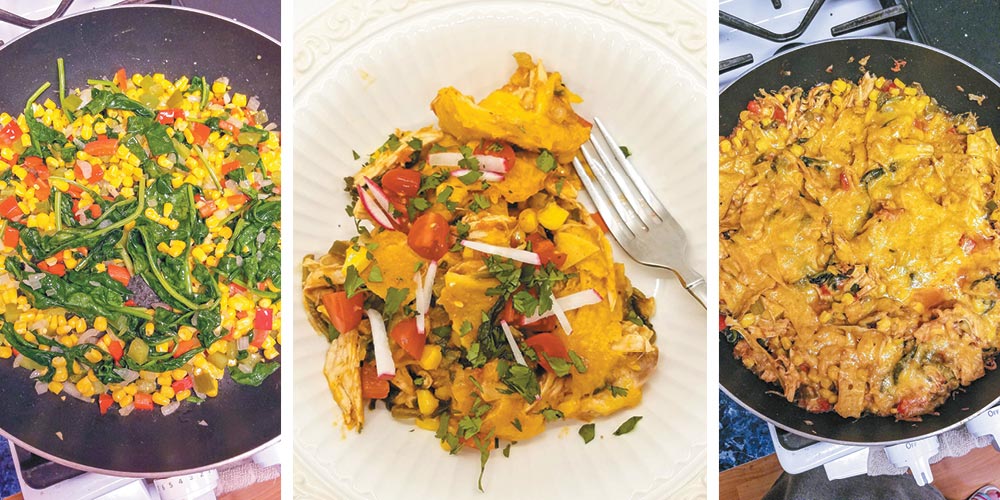 I was scanning the internet recently when I found an article in my feed called “A Month of Mediterranean Diet Dinners for Fall.” It looked intriguing. And no, we’re not on the Mediterranean Diet, although we probably should be. The article was from “Eating Well.” I’d formerly subscribed to the magazine, after a friend turned me on to it, until it ceased publication. However, the online version still exists (eatingwell.com) and I can honestly say I’ve never been disappointed with anything I’ve ever made from the magazine or website.

Many of the recipes were appealing, but most were geared more toward cool weather cooking, which here in East Texas, we probably won’t be doing for a while. There was one, however, that I decided to go ahead and make – “Chicken Enchilada Skillet Casserole.” It’s basically deconstructed enchiladas, prepared more as a casserole, eliminating the easy yet tedious chore of stuffing and rolling enchiladas. I prepared it as written, with the exception of using regular cheddar cheese instead of reduced-fat as that’s what I had on hand. However, it’s one of those recipes that you could easily doctor up and make your own, adding just about anything you’d like.

You’re given the choice of using red or green enchilada sauce and I opted for the green as that’s just what we typically prefer. It was an easy dish to make and it came together fairly quickly. We all three loved it and Hubby and Daughter both asked that it be added to the rotation. I’ll call that a win. We ate it on its own in large shallow bowls but it would pair nicely with a salad or any number of side dishes for a more complete meal.

• Heat oil in a large ovenproof skillet, such as cast-iron. Add corn, green and red peppers, and onion and cook, stirring occasionally, until charred, 7 to 10 minutes. Gradually add the spinach in batches, cooking and stirring frequently, until wilted, 1 to 2 minutes.

• Stir in the chicken, enchilada sauce and salsa until combined. Gently stir in tortilla strips. Sprinkle with cheese. Transfer to the oven and bake until bubbly, about 15 minutes.

• Top the casserole with tomatoes, cilantro, and radishes.

— The recipe notes add that to make ahead, you may cook the vegetables up to a day ahead and refrigerate. It also says that for best results, refrigerate and freeze any leftovers without the toppings and add them after reheating.