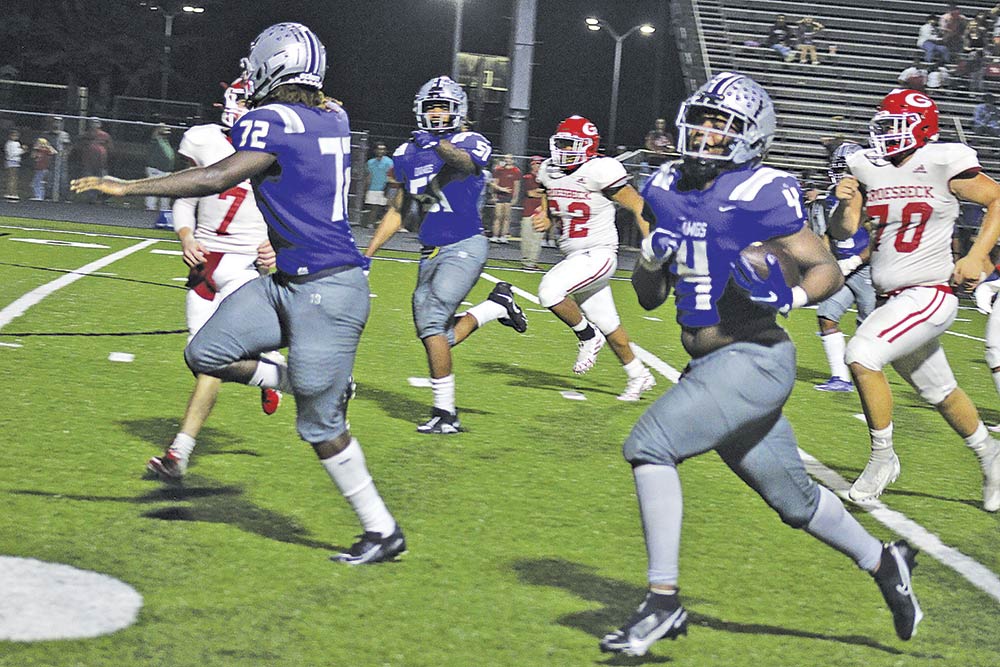 Crockett's Zandric Anderson (4) returns an interception 30 yards for a touchdown with 1:19 left in the game to give the Bulldogs some breathing room against Groesbeck. Photo by Larry Lamb

By Larry Lamb
This email address is being protected from spambots. You need JavaScript enabled to view it.

CROCKETT– Crockett and Groesbeck battled down to the final buzzer as the Bulldogs fended off the unbeaten Goats to win 39-34 at Driskell Stadium on Friday night.

"Again, it came down to a handful of pivotal plays in the fourth quarter," said head coach Alton Dixon, referring to a 64-yard quarterback touchdown scramble, a blocked punt that set up a score, a pick-six and a defensive stop on the last play of the game.

The game was tied 7-7 after a quarter but Crockett had nudged in front 14-13 at halftime. Groesbeck took a 21-14 lead in the third and scored again early in the fourth for a 13-point lead.

With :01 left after a holding penalty and two incomplete passes, Groesbeck quarterback Trent Platt escaped to the Crockett 30 before being forced out of bounds.

“That was huge. If Groesbeck scores, the game is over and they win,” said Dixon. “This was a tough game. Groesbeck is a really good team with really good players. All week we talked about this being a fourth quarter game. It took every tick on the clock. We had to play to the last second to have an opportunity to win the game,” said Dixon. “What a day, what a night. It was a long day.”

Groesbeck drew first blood on a 1-yard run by Chris Cox. The PAT by Nick Ramos was good for a 7-0 lead at the 7:26 mark.

Crockett's first series got off to shaky start with a fumble recovery by the Goats after a 25-yard pass completion.

Groesbeck took over near midfield but Crockett got the ball back on an interception by Ajani Ellis, who returned it to the Goat 20.

Apenalty against the Goats put Crockett at the 10-yard line and Collins pitched to Tywoin Delane for the touchdown. Kicker Angel Castillo tied the game at 7-7.

Groesbeck mounted another serious threat on its next series but was thwarted by a turnover inside the Crockett 5. Courtney Byrd hammered the ball carrier and forced a fumble that was recovered by Tristan McGraw at the 4-yard line.

Crockett picked up one first down before having to punt from its own 22. With Castillo punting under heavy pressure, the ball went off the side of his foot and the Goats took over at the Crockett 29 as the first quarter ended.

Cox scored to put the Goats in front 13-7 just 10 seconds into the second quarter.

It didn't take the Bulldogs long to respond. Collins connected with Devin Bedford over the middle for a 55-yard TD strike and Castillo provided the go-ahead extra point to make it 14-13 with 11:18 left in the half.

Groesbeck's next series ended with an interception by Simon at the Goat 32.

“The first half was just kind of a shoving match. In the locker room at halftime I told the kids this is like a game of chicken. You can’t blink. Don’t move, stay straight,” said Dixon.

Groesbeck went in front 21-14 midway through the third on a 32-yard pass to Matthew Valentine and conversion run by Cox.

“This was just a kid making something happen. He wasn’t finding anything on the pass so he makes the play with his legs. This was a very pivotal play in that it gave us that boost of energy that we needed,” said Dixon.

On the next series Collins scored from three yards out. A two-point conversion failed and the Bulldogs trailed 27-26 with 2:56 left. Collins started the drive with a 34-yard pass to Simon and later scrambled for 16 on fourth-and-five to keep it going. “This was a crucial first down pickup by Jadyn. I’m so glad he’s on my team,” said Dixon.

A punt on Groesbeck's next series was blocked by Zandric Anderson and Crockett recovered at the Goat 19. The Bulldogs needed just one play to cash in. Collins threw to Corey Simon for a 19-yard TD with 1:32 left. The PAT failed, leaving the Dogs with a 32-27 lead.

"That was an absolute dime from Jadyn to Corey," said Dixon. "Corey was our MTXE offensive player of the game. He started the night with a few drops, things he doesn't normally do.”

After Castillo drilled another kick into the end zone, Groesbeck's first pass was nearly picked off and then Anderson followed up with a clutch pick-six. The PAT made it 39-27 with 1:15 left.

"It was a great play by Zandric, our defensive MVP and special teams MVP. He did an amazing job being locked in, knowing the formation and set and what they like to do in that situation," said Dixon.

Groesbeck closed the gap on its next possession after completing a 44-yard pass to Anthony Lewis, who scored on a 3-yard pass on the next play. The PAT was good, making the score 39-34 with :16 left.

The Goats recovered an onside kick at their own 49 after the ball bounced off a Bulldogs’ pads.

“Groesbeck getting the ball back on the onside kick gave them a flicker of light but our kids never flinched. They came off the field and we talked about what we needed to do defensively. It came down to a handful of plays at the end,” said Dixon.