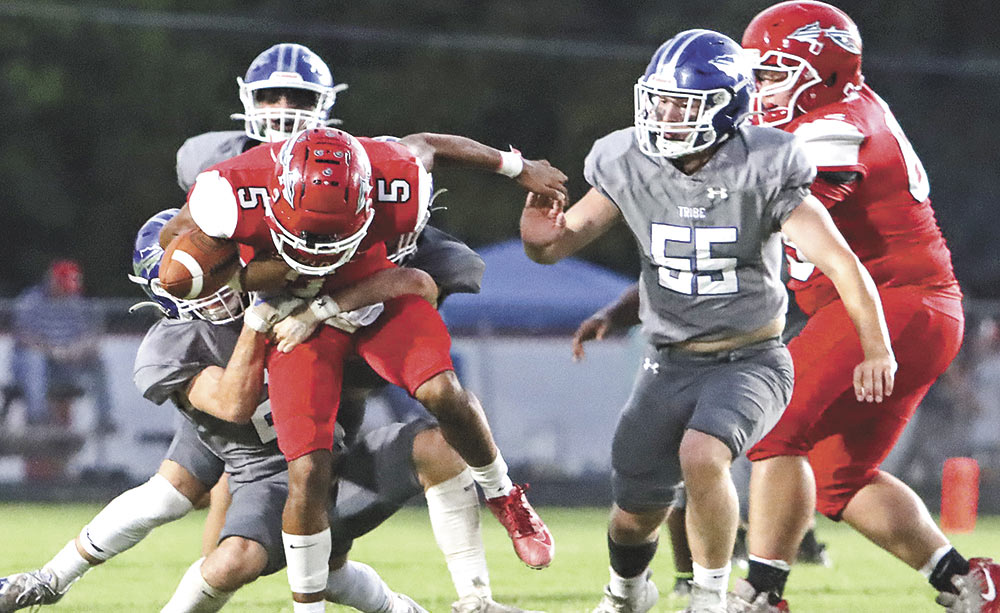 Groveton receiver Clifton Davis (No. 5) gets wrapped up by the Frankston defense. Photo by Martha Mericle

TRINITY — Following back-to-back road games that ended with a scoreless Tiger team, Trinity was able to entertain the home crowd with scores and leveled-up play against the Hardin Hornets on Friday.

The Tigers received the ball and opened in a new look offense with Marshall Sizemore leading the way. The Tigers ran the wildcat offense for the first plays and after gaining a first down returned to the traditional offensive, and on third down threw an interception.

The Tiger defense was able to force a fumble stopping the Hornets opening drive, but the first quarter turned into a defensive struggle that saw a 0-0 tie heading to the second quarter.

Opening the second quarter on offense, the Tigers were able to drive the ball to the Hornet 22-yard line, but a failed fourth-down attempt ended the drive. The Hornets first possession of the second quarter lasted only one play, but it was a short pass that ended up going 78 yards for the score and a 6-0 Hornet lead.

The Tigers drove the ball deep into the Hornet end of the field again, but on fourth down the Tigers attempted a 26-yard field goal by Jacob Robertson, which was the first successful field goal by the Tigers for several seasons. The Hornets then took six plays to march down the field and extend their lead to 14-3 before the intermission.

The second possession of the third quarter ended with another big play for the Hornets that gave them a 21-3 lead.

The Tigers punted on their next possession, but the last opportunity of the quarter saw the Tigers march 46 yards down the field. The drive was capped by a 16-yard touchdown pass from Jonah Gonzales to Bryan Crabtree.

Tempers flared by both teams and after many flags and lengthy discussions by the officiating crew, it was determined that each team committed three unsportsmanlike like conduct penalties and all penalties were offsetting and the Tiger touchdown stood.

The fourth quarter saw fight and determination from the Tigers, but ultimately they fell to the Hornets 21-10, further extending their losing streak.

The Tigers hope to get on the winning side of the scoreboard Friday Night at Tiger Stadium as the West Sabine Tigers head to town, kickoff is scheduled for 7 p.m.

Groveton
GROVETON — The Groveton Indians only managed a fourth-quarter safety as they posted a 14-2 loss to Frankston on Friday.

Head Coach Cody Moree said quarterback Dakota Campbell had his best game of his life, throwing for more than 200 yards and rushing for at least that much.

Hunter Davis, Kameron Spencer and Conner Kaufman each posted TD receptions, and Kaufman had 100-plus yards in kickoff returns including a 72-yard touchdown.