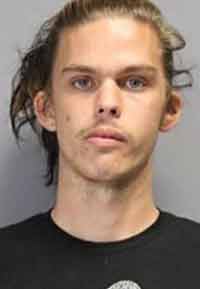 Chassin TauschBy Chris Edwards
This email address is being protected from spambots. You need JavaScript enabled to view it.

COLMESNEIL – The Tyler County Sheriff’s Office is investigating terroristic threats made by a Colmesneil ISD student.

According to Tyler County Sheriff Bryan Weatherford, deputies with TCSO responded to a report of terroristic threat on Wednesday, Sept. 21.

Weatherford said that while on the scene, the deputies gathered multiple witness statements and video footage, and were made aware of a 17-year-old student, Chassin Tausch, who had allegedly made threatening statements.

Tausch, according to Weatherford, had allegedly made threats to shoot other students following an argument earlier that day.

“Deputies then interviewed multiple students who corroborated this threat,” Weatherford said. Also, the video footage showed the student appearing to mimic pointing a rifle toward other students.

CISD issued a statement via social media on Wednesday concerning the incident, stating that the district was aware of the comments, and that “school officials are continuing to investigate the comments,” as well as local law enforcement.

A probable cause affidavit signed by Pct. 2 Justice of the Peace Ken Jobe resulted in an arrest of Tausch, who was arrested the same day.

Tausch currently remains in custody, charged with Felony Terroristic Threat. No bond amount has been set at this time.

Following the incident, CISD stated that its goal is to ensure the safety of all students and staff throughout the school day.

“Thank you for your concern and efforts in this matter as we strive to keep all students safe tomorrow and every day,” the statement issued on Wednesday read.

In the aftermath of the Uvalde school shooting in May, there has been an increased focus on safety in schools, and Weatherford committed to increasing the presence of law enforcement on all five of the county’s school districts.