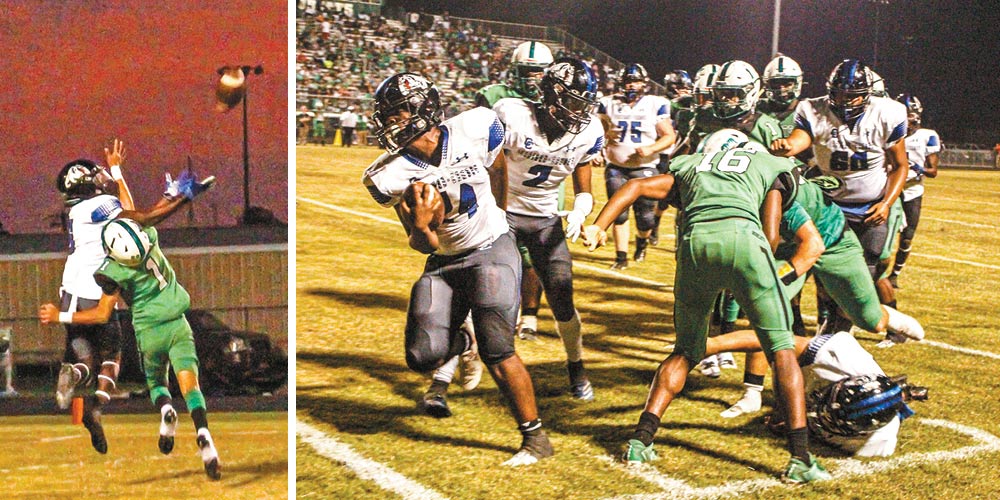 Bulldog senior Anthony Harrell catches a highly-contested pass from quarterback Morgan Rayburn.Bulldog senior Angel Reyes breaks away from the huge pile up with the help of the rest of the Corrigan offense for a touchdown run. Photos by Albert Trevino

Corrigan-Camden finished a perfect non-district record with a 56-20 road victory against the Hempstead Bobcats on Friday.

The recently reorganized Bulldog offensive lineup continued to fire on all cylinders in the blowout win Friday, mixing it up in the run and long passing game.

“I feel really good about calling anybody’s number. I see what they are doing and feel confident about running the plays we need to be successful.” said Bulldog coach Brett Ratliff.

While senior backs JaVarion Williams and Anthony Harrell provided big run gains for Corrigan, primary passer Morgan Rayorn also threw bombs throughout the game. The Bulldogs ran up the score early to a blowout lead by the halfway point.

“Morgan ran the offense effectively tonight. He was very surgical. I wanted to do things right and be smart [in order to] finish the game.” said Bulldog head Brett Ratliff. “Anthony and JaVarion ran the ball really well early on. That put [Hempstead’s] strong focus on the run. Then, we were able to open up and exploit some things.” Ratliff said.

Corrigan started with great field position on the opening drive, moving the chains quickly with Williams and Harrell on the one-two punch on the ground. Williams finished the drive with a 20-plus yard touchdown run for the first score.

Hempstead botched the long snap in their first possession, giving up another short field for the Corrigan offense. Bulldog junior receiver Bayden Lawrence caught a short touchdown pass from Rayburn to finish that possession and take a 14-0 lead.

The following kickoff was returned all the way to Bulldog 35, but Hempstead’s offense was unable to capitalize. Corrigan quickly took advantage with Williams sprinting along the sideline for an 80-plus yard touchdown run to make it a three-score game early.

Things got even worse for Hempstead’s last possession in the first quarter, as they muffed the kickoff return and gave Corrigan another short field.

The play of the night came on fourth down near the redzone, where Bulldog senior receiver Angel Reyes got help from nearly the entire offense, pushing forward to break through the scrum for a huge touchdown run.

The Bobcats were able to respond going into the second with a long keeper into the red zone by junior quarterback Marlon Fisher. This help set up junior back Calvin Thompson to later punch it in for a short touchdown run for six points.

However, the Bulldog offense would continue their assault on the ground and air to start putting the game away.

Lawrence would finish the next drive catching a long teardrop pass in the end zone from Rayborn.

Shortly after, Hempstead coughed up the ball at their own one yard line. It set up an easy touchdown run for Bulldog senior back Kadyn Burke, as Corrigan began to put the final nails in the coffin going into halftime.