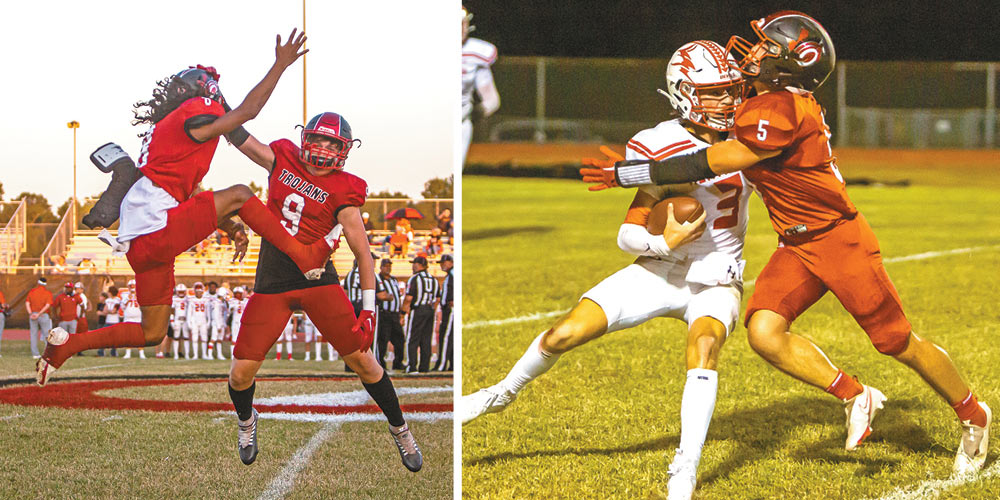 Cadyn Barton (No. 9) and Luke Monroe (No. 8) getting ready for the Huntington Red Devils. Noah Vercher (No. 5), junior running back and defensive specialist, grabs Elijah Mansfield before he can get a first down. Photos by Charles Ballard

COLDSPRING — The Coldspring Trojans came back from a disappointing loss to post a 40-0 win over the Huntington Red Devils on Friday to open district play.

The Trojans were on the scoreboard in just a matter of minutes, setting the tempo for the entire game; with 9:10 on the clock, the Trojans posted the first of 6 TDs of the night.

The defense held the Red Devils to 3-and-out, creating more opportunities for the offense, as the Trojans scored again 4 minutes later. Then again with 3:12 on the clock, Coldspring scored again, sending the game into the second with the Trojans leading 20-0.

With 7:14 on the clock in the second quarter the Trojans add another 6 points to their score, making it 26-0.

The Trojans managed to hold the Red Devils to only a few first downs.

The team posted a total of 342 yards on offensive on 37 Plays; total rushing yards for the night was 305 yards. Tyga Parker led the team with 174 yards on 12 carries, followed by K.J. Harden with 73 yards on 13 carries, and Cookie McGowen with 27 yards on 5 carries.

The Shepherd Pirates rallied to a 32-26 over the Crockett Bulldogs on Friday.

Head Coach Miles Robison said the Pirates started the game down 20-0, but the team kept fighting.

“We made some good adjustments at halftime and scored 16 points in the fourth quarter,” he said.

On offense, the line did a great job, which allowed H.D. Green to run for 133 yards and 2 TDs. Also contributing were Preston Stephens, who had 136 yards rushing and 2 TDs.

Defensively, the Pirates were led by Sheldon Ferguson and Alberto Tovar, and the defensive line took to the field in the second half and dominated and swarmed to the ball.

“It was a great team effort and our kids showed a lot of character by not shutting it down early,” Robison said.